A Mermaid is Born 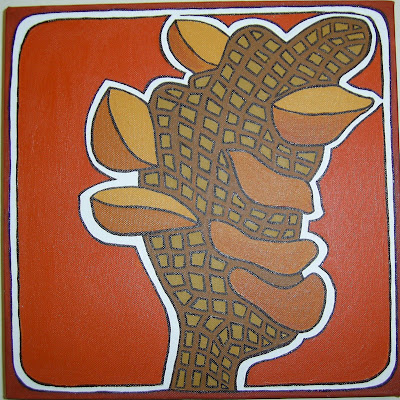 I know you're probably sick of seeing seed pods by now, but these two are a culmination of all the seed pods that you have seen before. It is true that with every painting you create, you learn something new about colour, technique, line and brushstroke. You learn to have patience, you learn to take risks and most of all to have fun. 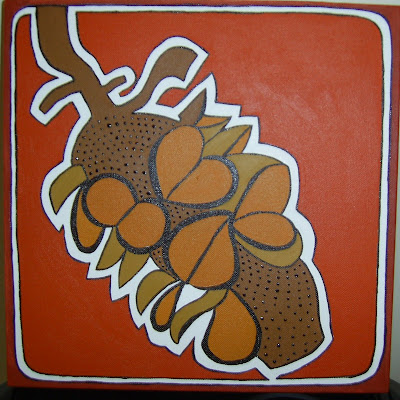 After so many seed pods I felt a real need to create something totally different. So a mermaid was born from my imagination, swimming up from the depths into the bright water above. The reproduction of colour is sometimes disappointing on these blog photos and the swirls of water are much more colourful than they appear here. You'll have to trust me on this! 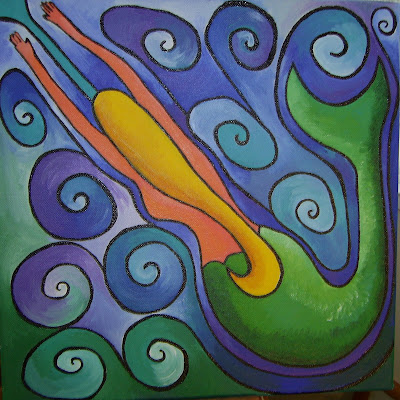 I'm tossing up whether to paint scales on her tail. We'll see...

Posted by patti at 16:22 5 comments:
Email ThisBlogThis!Share to TwitterShare to FacebookShare to Pinterest 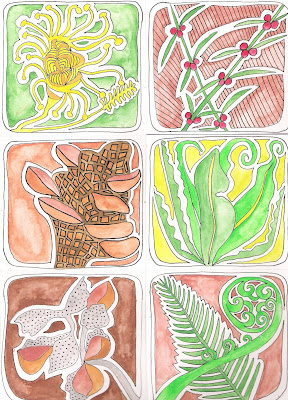 The second six of the Australian Bush Series. I will choose a couple of these to paint on canvas. I wonder which ones you prefer?

Doodles
Going through a pile of artwork that I've amassed over the years, I found one of the ink doodles I used to make when I was in High School. My peak time to work on these was in my Mathematics class, which frequently got me into trouble, with comments such as "if you only spent as much time on your maths as you do on your drawing...." Consequently I failed 'O' (Ordinary) level Maths, which is quite an extraordinary thing to do - I guess I just wasn't interested. (I must add, that though this prevented me from becoming an astronaut, physicist, engineer, architect etc. I'm in fact a whizz at my personal finances!) My school books were covered in these doodles and later when I began work, my desk blotter looked much the same! 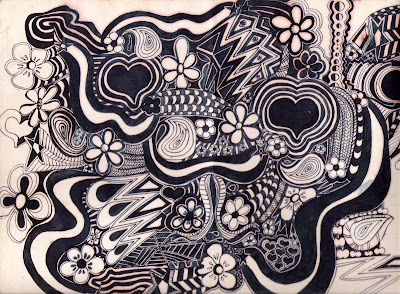 They would often have groovy lettering amid the hearts and flowers and shooting stars. I sometimes think I must have been a Tattoo Artist in a past life! Much later I began doing similar doodles in paint ...

I can still sit absorbed working on these for ages and have made loads of them, big and small. What these doodles say about my mind?....... mmmm!


Posted by patti at 12:17 9 comments:
Email ThisBlogThis!Share to TwitterShare to FacebookShare to Pinterest 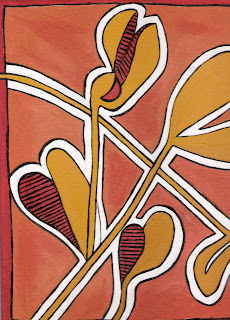 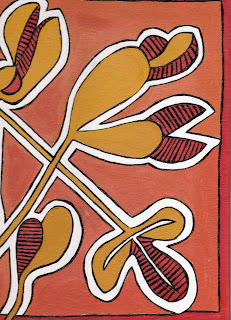 These are the Australian Bush series "seed pods". This is the one painting, I have simply scanned both sides to capture it all. I originally photographed it but the detail was not as clear as on a scan. Last night I had vivid dreams about more colourful paintings of gum blossoms. I will be doing some more ink and watercolour designs based on these dreams, which I will later paint. This way of working really suits me well.

We are having another cold, wet weekend. Hubby is happy because he gets to linger luxuriously in bed reading. My son is going a bit stir crazy - soccer games are cancelled and he is alternating between playstation, computer games and DVDs - showing last night was Forrest Gump and the complete set of Jurassic Park. I am content to make art, read two books at once, and yesterday enjoyed watching an Australian movie "The Oyster Farmer", filmed on the Hawkesbury I recommend it if you haven't seen it yet, it is filled with superb Australian characters. Our dams are filling up again, so many prayers have been answered, but I'm longing for blue skies and sunshine again.
Posted by patti at 12:04 6 comments:
Email ThisBlogThis!Share to TwitterShare to FacebookShare to Pinterest 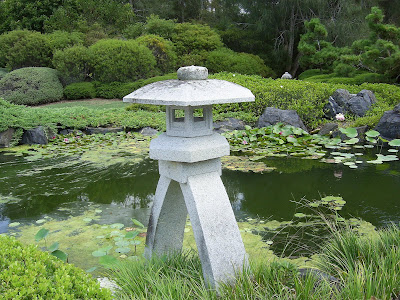 I read an article recently about the healing effect of poetry writing, in particular the Haiku.

The article tells of a guy living in New York who was constantly aggravated by the (unnecessary) honking of car horns. His first response was one of rage and so he threw eggs at the car, making the situation worse. But on reflection he decided to articulate his anger and frustration in a Haiku poem, or as he calls them a "honku"! Much better for the blood pressure!

The article goes on to say how calming reading poetry can be and that "the act of putting down our thoughts is emotionally stimulating". It also talks about a woman who had mini strokes causing neurological and mild cognitive problems, whose healing received a boost through writing poetry, due to the "workout", or mental discipline her brain received while composing. "Haiku trains the mind to see the little things in life, instead of obsessing about war, death, ageing, pain and the stress of making a living".

Haiku poems are meaningful yet compact and contain 17 syllables, traditionally five in the first line, seven in the second line and five in the third. A Haiku doesn't rhyme.

I have written verse and prose and have wanted to have a go at Haiku ever since my son brought his Poetry homework home in his first year of High School - I took finding this article as a nudge in the Haiku direction! Here are a few of my first attempts. They're harder to create than they look, but it's kinda fun, and like doing any puzzle, it becomes easier with practice.

Posted by patti at 09:13 17 comments:
Email ThisBlogThis!Share to TwitterShare to FacebookShare to Pinterest 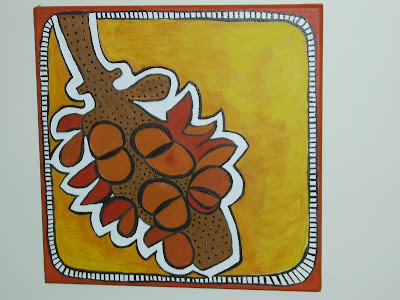 The Banksia Pod - painted in acrylics and enlarged on a 12" x 12" canvas.
Next - Gum leaves.
Posted by patti at 11:29 7 comments:
Email ThisBlogThis!Share to TwitterShare to FacebookShare to Pinterest 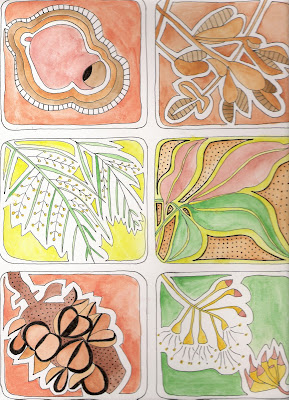 Yesterday I cleaned out my little studio. It's amazing how quickly "stuff" accumulates. My artwork was not displayed very well and I had art materials lurking in corners and under things, making it all hard to get to and I kept knocking things off my table due to lack of space! So I have; expanded one shelf crammed with materials into two shelves, deducted some decorative items from the table to create more space, displayed my artwork in a more attractive way, added an oil burner to fill the air with scent and at last, it's all very organised and streamlined. I feel so efficient!

With all this good energy floating around, I spent the morning creating an "Australian Bush" series, which are designs using my collection of banksia pods, gum nuts, wattle branches and gum leaves. Created with ink and water colour, they are sample designs, in colours of the Australian bush. Later, I will select the designs I like best (I prefer the seed pods over the leaves) and create them on a larger scale, maybe making just a few changes. In fact I enjoyed making these so much, I hope to paint some of them in acrylics on 12 X 12 canvas.

Posted by patti at 14:56 7 comments:
Email ThisBlogThis!Share to TwitterShare to FacebookShare to Pinterest 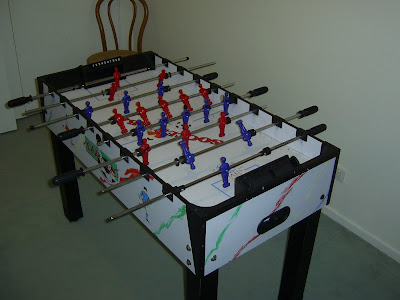 We are the proud new owners of a Fooz Ball Game (at least that's what my son calls it!) I found the game in our local Op Shop in excellent condition and knew it would be a hit in our Soccer mad household. I managed to haggle the price down by $25 dollars, which meant we could then have it delivered. It is such an awkward shape, with rods sticking out either side, so it was impossible to get into the back of our car - We tried hard though!

Luckily there was room for it in our upstairs spare bedroom. My son had two of his mates sleepover on Saturday and they had loads of fun (making loads of noise!) playing this game. The previous owner had written names on the backs of each player, so we will paint over them and we can then write on the names of Australia's World Cup Soccer team instead.

where are you from? 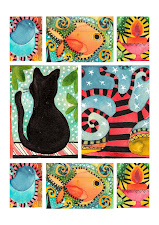 thank you for visiting ....